Circle Technology – Why it is a fundamental

Circle technology is a crucial aspect of force and structure understanding. It is also one that I have not seen in other Wing Chun or internal martial art schools. This completely baffles me, because it is such a basic concept. It is so logically and so easily demonstrated that many people from other 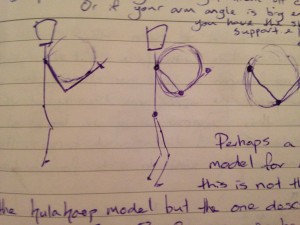 Wing Chun schools who come to visit me, can’t believe they haven’t been taught it, or at least, thought of it themselves.

Chu Shong Tin circle theory goes extremely deep. Admittedly deeper than my comprehension at 6 years of training. That said, I now have a great understanding of the basic concepts of it and as a teacher (also a school teacher) I am able to get this across to students very easily.

The very idea of circles is often frowned upon by the larger wing chun community. Not only are circles never mentioned in the other schools I have seen, but many wing chunners I have met completely reject any notion of circles in the wing chun system. Even the mere mention of the word ‘circles’ is honestly like blasphemy to many people. I have even met people that reject Chu Shong Tin’s ideas solely on the basis that “He’s too focussed on circles”.

Unfortunately for them (and perhaps fortunately to us!), circles are simply something that you can’t get away from. When someone has a better stronger structure than another person, it’s circular theory in practice …. period! Our limbs all move in a circular motion. The only thing that enables our fist to go in a straight line in the first place is the two different circular rotations working at the same time (the rotation of the shoulder joint & the opening of the elbow joint). There are not many body parts that come directly straight out without joint rotation. So you are using circles whether you like it or not. A deeper understanding of this is what will get your wing chun skill to much higher levels of power.

Circles are the strongest shapes found in nature. Ever stood on a ball? We all have and we know what happens. We fall on our asses as the ball rolls our foot to one side of it and accelerates while doing so. And we all know the countless examples of how circles are used in machinery.

“Well that is all very well and nice, but how do these obvious facts apply to my wing chun?” Well, I will give you some very basic examples. First, watch this video by Sifu Mark Spence about this very concept. You need a break from my boring writing style anyway!

This explanation from Sifu Mark is pretty awesome because you can see the effect he has on his partner when he rolls the wheel over his arm. It’s a similar effect to when you stand on a ball. There is a very small point where the pressure can go directly into the circle, but just a tiny bit one way or the other and the arm will roll either up or down. And the really cool thing is, that the more pressure is given into that point, the easier it is to roll it up or down and the more it will affect them. This will break the partner’s structure and often their balance. You can see an example of this when Sifu Mark replaces the wheel with his arms. Actually, in both cases, you can see that the partner’s arm structure as well as standing structure break with the head jolting forward.

Ok, so there is a great reason why Chu Shong Tin loved to whip out the hula hoop in his seminars. I love to use the hula hoop when explaining circle theory to students also. 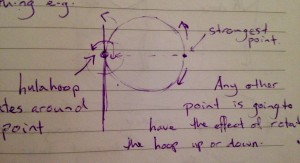 So if you look at this picture, the verticle line represents our standing position or spine. The part where the hoop touches the verticle point is our shoulder joint. The hula hoop is our arm. Obviously our arms aren’t circular like that, but put that thought aside for a moment. Imagine how if you were to apply pressure directly into hula hoop, it would cause it to rotate up or down around the shoulder joint. So in this sense, the hula hoop could represent a fok sau or a tan sau. Now if you could actually imagine this apparatus in front of you, you would realize that rolling the circle up and down a verticle plane with pressure, is a strong position for even a flimsy hula hoop to withstand. You could push directly into the center of the hoop and cause it to bend a little, but you could imagine how if you were 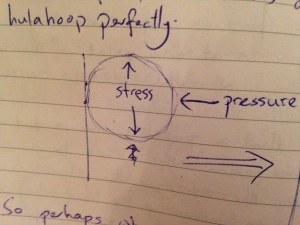 to punch it quickly it could easily roll it up or down.

Ok, so we know that if the hoop is attached to a pole and is verticle, its strongest movements are going to be verticle. I usually demonstrate this to students by holding a hula hoop in a verticle position and hold it with my other hand against my armpit. If you push straight into it, it will roll vertically
up or down (rolling under my armpit or shoulder). However, if you were to push the hoop side to side, my fist wouldn’t be able to stop you from moving the hoop sideways. You have leverage. The exact same thing happens when I hold my tan sau out. If you were to put sideways pressure on it, it would put muscular stress on my shoulder. Anytime you depend on muscle to hold a position, you are not aligned and are weak. This type stress is worlds apart from if you were to put verticle pressure on me. In that case, I would just let the natural rotation of the joint take place. No muscular stress required at all and it is pretty much the partner moving my arm for me. In fact, any time your shoulder joint is stressed when pressured, you are not applying circle theory correctly.

Now as you can imagine, it’s the same thing with the bong sau, except the opposite. If you were to put verticle pressure on it, it would be weak. However, horizontal pressure would just let me rotate sideways into positions that would be advantageous to me. 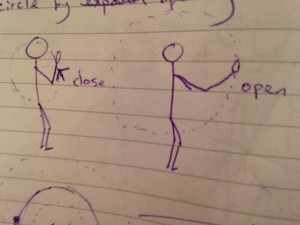 Opening and closing the circle (or expanding and contracting it) adds a whole new dimension to it. For one thing, the stress point can be changed to assist in the rotation in either direction. But that is a discussion for another time.

Armed with this basic fundamental understanding, you have the dual advantages of both having a stronger aligned structure as well as being able to crush and break your partner’s structure which is pretty easy to do on people who don’t have this understanding.

There is way more to circle theory than this. And in actual fact, with a deeper understanding, the whole theory changes from two-dimensional circles on vertical or horizontal planes, to the 3-dimensional shape of a sphere.

This site uses Akismet to reduce spam. Learn how your comment data is processed.